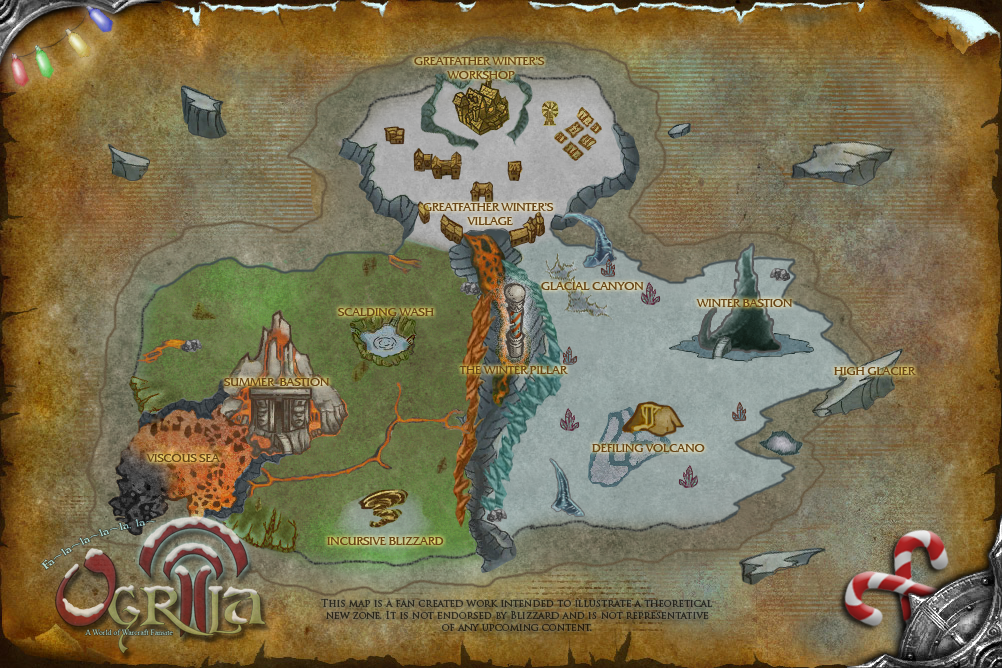 It is said that winter is brought upon by a legendary being known as Greatfather Winter. As he passed over the land, the veil of winter would be his cloak, enshrouding the land in snow and ice. For those who welcomed him, he would provide gifts.

After the Sundering, however, the fractured landscape forced him to stop his journey as often as he wished. Therefore, he traveled instead to an island at the northernmost spot on Azeroth, and constructed a great pillar. This pillar would regulate the seasons of Azeroth without the need for Greatfather Winter to travel himself.

Greatfather Winter sends out a plea for help to the major faction capitals around the world, and the heroes answer. After arriving in Greatfather Winter’s Village, they learn about two factions warring over the holiday. The Champion of Summer wants the celebration of renewal and gift giving to move to Summer, while the Champion of Winter is ready to violently defend the winter tradition.

The heroes meet with envoys from both sides and agree to help calm their rival. This could perhaps be faction based, with the Horde and Alliance universally taking sides, but that’s not important to the overall storyline of the event.

Whoever the heroes happen to agree to help, they travel to their citadel and past an elaborate procession. Each leader explains their point of view, and how the other has gone so far as to begin spreading their season inside the other’s land. In the Land of Summer, this is the Incursive Blizzard. In the Land of Winter, this is the Defiling Volcano.

Once the player has suppressed the incursion, they will be sent to assist on the front, around the Rift of Strife. After which they will finally enter enemy territory.

Depending on the side they chose, players will quest in the Scalding Wash/Glacial Canyon, before moving on to the Viscous Sea/High Glacier.

After the player has finished those quests and helped clear out the minions of that respective land, they move into the opposing main citadel. There they will challenge the rival of whatever side they chose, either the Champion of Summer or Champion of Winter

The two Champions help you discover that the Greench has left for the Winter Pillar, and you hurry to catch up. Once there, the Greench reveals that he was the one who brought the elementals to the Northrend Pole, by the will of the Old Gods. When he lost control, he instigated the conflict between the Champions to weaken the Winter Pillar, disrupting the seasons to weaken Greatfather Winter and to spread devastation. With Greatfather Winter weakened, the Greench would steal his powers to bring about Winter Veil Twilight.

With the help of the Champions, the heroes finally defeat the Greench and save the Winter Pillar. Greatfather Winter thanks everyone and begins doling out presents.

At the very, northernmost tip of Azeroth, there is a land rarely visited. More north than the furthest tip of Northrend, this land came to be known as Northrend Pole.

What makes this fight especially troublesome is that, with the Cataclysm over and many elementals disconnected from their lords, the Champions of the Seasons have called them to their service. With this unprecedented force, the war between the seasons is shattering the land around the Winter Pillar. This magical monument keeps the seasons of Azeroth in check. If the fight continues, it might be destroyed, and no one can say what would happen then.

Northrend Pole lies to the north of Hrothgar’s Landing, and is only accessible with a special flight path during the holidays.

The zone has three distinct biomes: A snowy village, a tropical forest, and an icy plain, all divided by the Rift of Strife.

A questline will exist for the zone, but there will also be a series of daily quests for both sides as well as helping out in Greatfather Winter’s Workshop.

The west end of the zone is known as the Land of Summer. Here the ice of the northern island has been melted away to reveal a lush landscape. There are pockets of immense heat, however, including an entire volcano spilling into the sea. Closest to Greatfather Winter’s land is the Scalding Wash, a body of water formed from the remaining ice that melted away to form the Land of Summer.

Far south of the Wash is the Incursive Blizzard. A place where the Champion of Winter has begun trying to freeze over the land once more. In the eye of the Blizzard is a terrible tornado powered by a great elemental.

The east end of the zone is known as the Land of Winter. In the Champion of Winter’s zeal, he has replaced every bit of the snow of the land with jagged spires of ice. To enter the land from the village, you must pass through the Glacial Canyon, a great tunnel with icy walls rising into the sky. Strange things are said to be occasionally glimsped in the transparent walls.

At the south end of this land is the Defiling Volcano. Here, the Champion of Summer has summoned a volcano that has begun melting the ice away into a steaming sea. It is said that a great elemental lies in the heart of the volcano.

Further east is the Winter Bastion, a great icy citadel surrounded by a freezing moat. Its cold halls give way to a great throne room high enough to touch the clouds. Rising from the nearby coast is the High Glacier, an old block of ice that has become lodged in the Northrend Pole, and is now home to many of the Champion of Winter’s minions.

Between the Land of Summer and the Land of Winter, the Rift of Strife has formed between the battles of the two Champions and their minions. It is a deep cleft in the land, with melting rocks ready to be launched on one side, and icy lances being prepared on the other. At the very center of the Rift is the Winter Pillar. This Pillar is a massive obelisk stretching into the distant sky, with the fire and ice of the Champions’ battles snaking around it in a spiral.

The Champion of Summer is a mysterious, fiery man who claims he is the embodiment of the Summer season. He has come to Northrend Pole to convince Greatfather Winter to spread cheer during Summer. Some believe he is descended from the Earth Mother.

The Champion of Winter, once an ally of Greatfather Winter, has become so obsessed with his goal to defend the season and holiday, he has begun to twist into a cold and unforgiving man. Some believe he is descended from the Earth Mother.

The Greench has returned for another holiday season. Seeing how the Greench spreads chaos and despair by disrupting an otherwise joyous time every year, the Old Gods have decided to recruit him for their own ends. Falling to their whispers, the Greench now seeks to steal the very essence of Winter itself to wield against the world.

Greatfather Winter is an ancient being who once spread winter across the planet himself, giving great bounties to those he met. After the Sundering, he built the Winter Pillar to regulate the seasons as he traveled less and less over the years, leaving the mortal races to their strife. Eventually, he became a myth to the people of Azeroth.

Next to Greatfather Winter are examples of some of the many Titan creations that assist him in all of his endeavors.